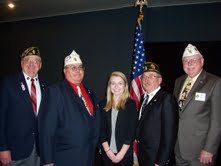 The purpose of The American Legion’s National High School Oratorical Contest is to develop a deeper knowledge and appreciation of the Constitution of the United States on the part of high school students. Other objectives of the contest include the development of leadership qualities, the ability to think and speak clearly and intelligently, and the preparation for acceptance of the duties and responsibilities, the rights and privileges of American citizenship.